& a leadership that can’t handle it 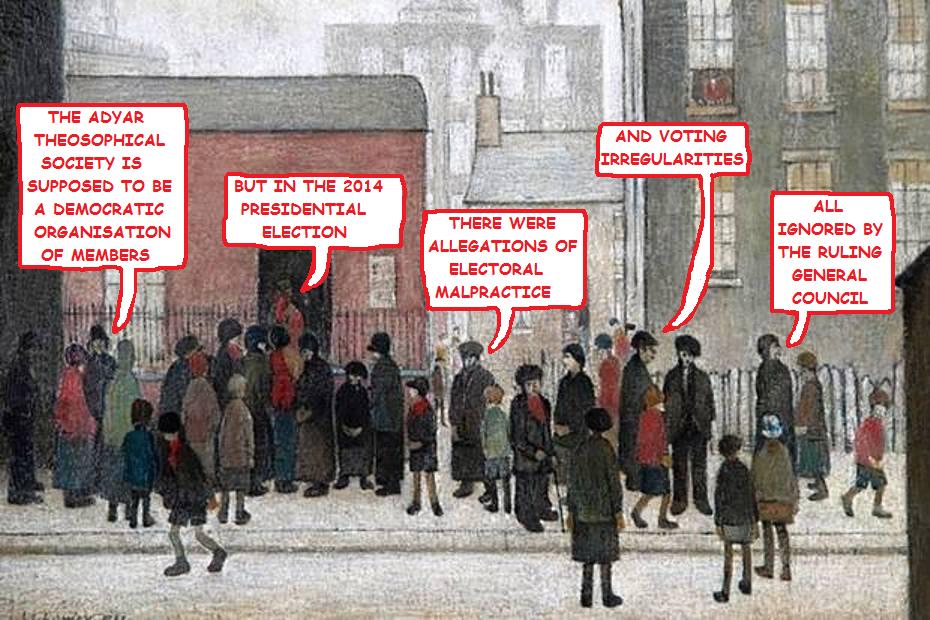 Serious trouble in the Adyar Theosophical Society and a leadership

demonstrating that it is incapable of dealing with it.

The Source of the Trouble

The Theosophical Society with its headquarters in Adyar,

Chennai, India is now in meltdown after a disputed election

for the international president in which there were allegations

of election malpractice and voting irregularities.

The governing body (General Council) of the Society has

chosen to ignore the allegations and is now maintaining

a wall of silence on the issue.

The elected president Tim Boyd is not recognised as president

by a significant proportion of the members.

with the members and is too frightened to act. 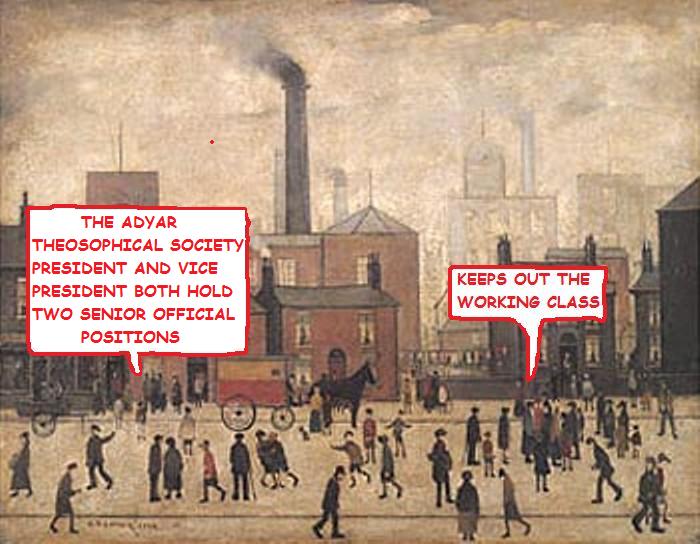 During the tenure of the last International President, the posts of American

and International Secretary were held by four different people.

Section Presidency and despite the allegations surrounding the validity

of the 2014 presidential election result, the ruling General Council

Chittaranjan Satapathy was responsible for organising the

Membership Decline – The Elephant in the Room

The True Status of the

The Voice of Stagnation

Will there be an Adyar Free Future?

An Extra Box on the Ballot Paper

Suggestion for the 2014 Adyar Theosophical Society

A Society Without Members

Is the 2014 Adyar Presidential Election Invalid?

family turned the Adyar Headquarters into the family firm.

How many suitable applicants were discounted so that

Radha Burnier could give a job to a family member?

Don’t Just Do Nothing

Despite decades of decline and stagnation leading the

Adyar Theosophical Society to the verge of evaporation

or disintegration, the leadership have so far shown no

sign of coming up with a strategy for ensuring the

continuation of the Society as a unified body.

Adyar, the Sole Purpose of Adyar

Revealing that the Adyar elite’s stately home is under threat

of compulsory land purchase and can be saved by convincing the

authorities that it is in fact an international headquarters (if true)

may have given the Theosophical Society members a brilliant

opportunity to get Adyar off their backs.

An overview of the Adyar Theosophical Society

What an Insult to Members

Expecting members to vote for candidates while withholding

the leadership for the general membership

contempt for the duration of this election then the Adyar Theosophical

Society will be an empty shell by the time it is completed.

The secrecy with which the Adyar Theosophical Society

Is this secrecy for its own sake or are some serious

issues being suppressed and kept beyond discussion?

Banging the Drum for Theosophy

Family control of Adyar has reduced the members

of the General Council to the status of town hall officials.

the members out of participating in the

running of their own organisation

Keeping the International Headquarters at Adyar

It may not be that easy

An idea for consideration

What is Behind the

members the right to be consulted on issues and the

ability to convey their views directly to the leadership.

Why does the leadership of an organisation

treat its members like this in the modern era?

Towards a New Model for Theosophy

now isolates itself within a cult of superiority

while the Society evaporates around it.

A Theosophical Society can survive but not

in the current format.

When the Issues are Huge

Is this what is on offer to the Adyar Theosophical

that has a different agenda from that of the Society?

This election is really inconvenient for the leadership, isn’t it?

Why are the members being hustled into blind voting?

What are the leadership’s post-election plans?

of their Own Society

An inter-regnum in the presidency, during which

matters are discussed, is the only course of action

with a chance of saving the Adyar Theosophical

Society as a unified body.

Now Here’s Something Worth

Are there plans to sell Adyar without

A leadership shutdown combined with a total

and an intense fear of revealing it.

Is the self imposed isolation of the General Council effectively

a mass resignation as they have found, after the death of

Radha Burnier, that establishing control of Adyar is too difficult?

The presidential candidates are as much victims of the

General Council’s silence rule as are the members.

control over the future president.

Make Way for the Messiahs

Have the Esoteric Section and the

General Council merged into one body?

for the Adyar Theosophical Society?

CVK Maithreya presented plans for the future, in

Does suppression of discussion mean that the

The General Council has abused its power

by putting itself beyond accountability.

A new leadership is needed, and fast.

No replies to questions.

Do the members still have a Society?

Those who have kept the Society time warped

in the 1930s now have the task of introducing

reform and they obviously don’t want to do it.

Beggars at the Door

Left sitting out in the cold and starved of information,

members now realise how the General Council regards them

From The Top Down

The Adyar Theosophical Society is decades

out of date and desperately in need of reform

starting with getting rid of a leadership that

refuses to be accountable to the members.

The Royal Court of Radha Burnier

Making it a bit obvious aren’t you?

The Australian Section made a formal complaint to

Radha Burnier about her victimisation of the Australian

Disgraceful Treatment of an Adyar Employee

A woman sacked and evicted for complaining.

Given 13 days to get out of her home.

by a General Council member to promote

reform within the Theosophical Society

Make Your Wife The Chairperson

that the General Council

Is Adyar Still The Headquarters?

Or why don’t you do something

to recover Adyar for the members?

Adyar Prepares for the Break-Up

A Job for Your Daughter

Triumph of the Weak

to do anything if the election is bent

You don’t need a plan

You don’t need a degree

If your name’s Raghavan

No Stand For Democracy

An appraisal of the General Council’s commitment

to maintaining the Adyar Theosophical Society

as a democratic body

A Society Without Leadership

Nobody sees it, Nobody hears from it

Is it hiding somewhere? Does it exist?

Who will Believe It?

Even if the presidential election is correct and above board,

the confidence in the General Council has fallen so low

that members won’t believe it.

Preethi Muthiah has highlighted an endemic problem at Adyar,

which the General Council has ignored for many years.

There are still no plans implement a grievance procedure and

Of lady over 70 from her job at Adyar

True Purpose of the

What the paying members want has little to do with

this election, as the silence and lack of information show.

The real purpose of this election is for the General Council

to deliver the candidate that the Adyar ruling elite wants.

What Makes this Election Invalid?

Was Your Vote Counted?

Was your vote forwarded to Adyar?

Was the election actually held?

Against a background of silence, a court case and

allegations of irregularities, these are fair questions.

Not Being at Adyar

Well, it’s much easier than being a real president

Democracy in the Adyar Theosophical Society

No Right To Complain

Well, what can you expect in an organisation where

the leadership regards the membership as ballast

Doubts about the integrity of the election

While the President Creeps into Office

No hurry to prove the election result

But a real hurry to get the president installed

The Adyar Theosophical Society has become

Doubts about the election result will

Adyar & the US each have

as a personal platform.

What was the inauguration for?

That’s the clear message from the

International President to the members.

resources by a two job president

Master of the Small Event

The exclusion of Mr Maithreya from the rushed

inauguration was an insult to him and his supporters

of the Adyar Theosophical Society?

And if so, it’s a very ugly face

Is Wheaton Set To Support Adyar?

A two job president will produce a massive conflict

of interest that will divide the American Section

Who's the Guy in the Job?

Why was Campaigning Banned

Theosophical Society Accountant to the police,

resulting in detention and two days of interrogation.

against the Adyar Estate General Manager.

Did the 2014 Presidential Election take place in a

Over Someone Else’s Car

on getting himself inaugurated.

on dealing with problems.

Serious allegations about a reign of terror at Adyar

are lodged with the International President.

There is no response, just silence.

Serious allegations surround the treatment of staff and

that the elected president is unable to do anything.

and threats of imprisonment are not new.

indicate that the issue has been around for some years

can be verified by section leaderships on the current information.

One Man, One Vote

Tim Boyd nominates only one candidate for

International Vice-President and expects the

General Council members to vote for him.

As many ask if it is safe to go to Adyar.

An idea for serious consideration

The General Council Should Allow

will never be the same again.

Tim Boyd's failure to deal with serious allegations will

mean that the fear of being banged up in police cells

will henceforth haunt visitors to Adyar.

Yet another source of information

regarding staff bullying at Adyar.

to investigate allegations, that its own staff and members

are bullied by the use of threats of imprisonment.

Did you get an Invite?

Did you know you were cordially invited to the

About the Conduct of the

The only option is to

With proper safeguards this time

Section Council that he is nominating

Tim Boyd – no discussion – no consultation

With the unresolved issues raised at that time,

the election clearly should not have gone ahead.

That Cannot be Ignored

Relating to the conduct of the 2014 Presidential Election.

It becomes clear that the election committee had

valid evidence for misconduct but ignored it

to act as a governing body

As the Adyar Theosophical Society

Admit it General Council, being the governing body of the

Adyar Theosophical Society is too difficult for you.

True to form, one month has elapsed and

the President and General Council have failed to

The General Council was confronted with considerable

evidence that the election was bent but just stood there

and let it go ahead.

A Leadership at War

with the Paying Members

of its Own Organisation

This is the clear message as the International

Links to other News Boards

The Future of the Adyar Theosophical Society

The Theosophical Community
"There is no religion higher than truth!"

The Adyar Theosophical Society has

representation in the following countries

The Adyar Theosophical Society also has the following

​The Council of the European Federation of National Societies